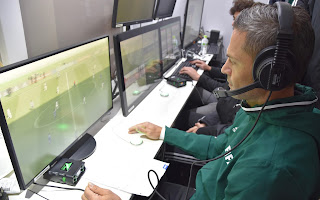 VAR
The VAR watches the main camera on the upper monitor and checks or reviews incidents on the quad-split monitor. He is responsible for leading the VAR team and communicating with the referee on the field of play.

AVAR1
The AVAR1 concentrates on the main camera and keeps the VAR informed about live play if an incident is being checked or reviewed.

AVAR2
The AVAR2 is an assistant referee located at the offside station. He anticipates and checks any potential offside situations to speed up the VAR check and review process.

AVAR3
The AVAR3 focusses on the TV programme feed, assists the VAR in evaluating incidents and ensures good communication between the VAR and AVAR2 located at the offside station.

The Video Operation Room (VOR)
The video assistant referee team supports the referee from a centralised video operation room (VOR), located in the International Broadcast Centre (IBC) in Moscow. All relevant camera feeds from the 12 stadiums are provided to the VOR through a fibre optic network. The referee on the field at each stadium talks to the VAR team via a sophisticated fibre-linked radio system. 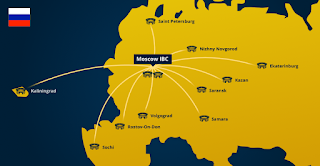 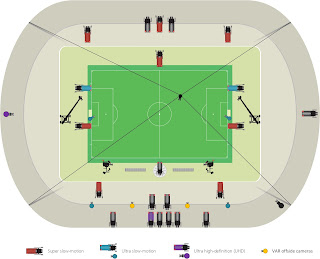 VAR Explained
Throughout a match, the video assistant referee team constantly checks for clear and obvious errors related to these four match-changing situations. The VAR team communicates with the referee only for clear and obvious mistakes or serious missed incidents. For the 2018 FIFA World Cup, the referees have received clear instructions on when to accept information from the video assistant referee and when to review the video footage on the side of the field of play before taking the appropriate action/decision. 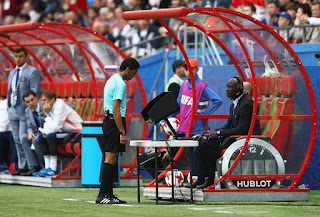 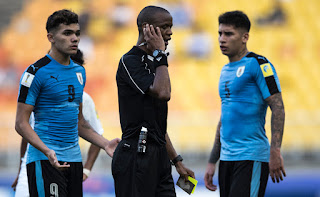 Hand to the Ear
The referee can delay a restart at any time to communicate with the VAR. He will signal this by pointing to his ear. This is not considered an official VAR review. 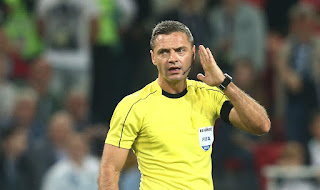 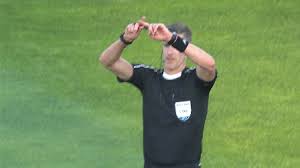 VAR Information System
To ensure that all football fans in the stadium and watching on TV are well informed during a review process, FIFA has developed a VAR information system for broadcasters, commentators and infotainment. For each match, a FIFA staff member informs the broadcasters, commentators and infotainment about the different steps of the review process, including information about the reason for the review and the outcome of the review, via a networked touch tablet. The person operating the tablet is located in the video operation room and has access to the audio from the referee communication system as well as the camera angles the VAR is looking at. The VAR information system will also be used to automatically create VAR-specific graphic templates for TV and the giant screen in the stadium.