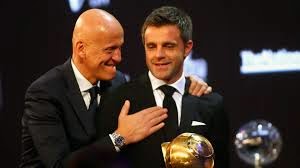 - At the top at 43 years. Do you feel satisfied?
- Physically, I'm fine. Indeed, I have lost eight kilograms. And the desire is still there.
- Would you continue after 45 years?
- FIFA intends to raise the age limit. I will know the day when I will not have incentives anymore. Now I still have plenty.
- It is more difficult to train the mind than the body?
- Certainly. I do not mind working hard three hours a day. It's harder to stay focused, determined, and to study constantly.
- In what sense?
- I watch a lot of matches and I have a personal library where I keep the most significant episodes. I analyze the tactics of the teams, the set pieces: the wall included. It is an essential advantage when you go onto the field.
- What is your relationship with psychology?
- Continuously. In these years I realized how important is my attitudes in relation to others. Just as it is important to get to know the personality of the players. Sometimes you can communicate by a look or a gesture. Once in Madrid an UEFA psychologist followed me for three days and it was a very interesting experience.
- After all, it's about respect.
- One aspect is the role of the referee; another one is the dialogue on the field. Due to my character, I am open to discussion; the goal is to make fewer mistakes as possible.
- But the relationship with the players is improving?
- Let's say, yes. But we must all commit ourselves to fill a gap that is cultural. Perhaps a meeting per year is not enough. We may need more, even if it's not for me to decide the forms.
- But do you ever get off?
- Yes, on Monday, when I go swimming. Between the strokes I relax. This is my favorite slow-motion.
- What music do you prefer?
- I am a fan of U2, but I also like the songs of the moment.
- How is your work as an architect?
- My pride is the project of the pediatric oncologic clinic Sant'Orsola in Bologna. Unfortunately, it is a work from 2001, because in recent years the refereeing commitments forced me to loosen this activity. Too bad, because for me it is the best job in the world.
- But wins the other passion...
- I think that I chose to be an architect when I was 13, while the referee option only came up when I was 16. I was a promising wing, and then an injury and a classmate who brought me to refereeing changed my life.
- Is the best referee of the world allowed to make mistakes?
- The danger is when a referee believes to be infallible. In that case, he cannot handle the error, and if he commits mistakes, it is likely to remain. I missed so many times and my strength has always been to learn from mistakes.
- Was there one mistake more instructive than others?
- Seven years ago, in Udine, with Totti, we all know how it went. Then we have clarified and we both grew up.
- For Capello, Serie A is not very competitive for teams. Does that also apply to the referees?
- It's the exact opposite. Here, the selection becomes natural in the lower leagues. And even in Serie A the obstacles are more difficult than in other countries. Italian referees are very well trained.
- Our players behave better in international competitions?
- All are more focused; they know that they risk more, because they have fewer games to play and a red has more weight.
- Do you see a future a la Collina?
- I do not know; for now I still love being on the field. I can only say that one day I'd like to instruct young people. Why not, even children.
- How are your relations with other referees?
- There's the obvious ambition of all, but I do not see jealousies. The dressing room is very united.
- Do you feel as a leader of this generation?
- I cannot decide or say that. Did you see a group of penguins? They always stay close to the cold, then one comes off and the others follow. Leadership is always for others to recognize it.
- Meanwhile, Messina gives room to other referees.
- It seems fair. All must grow.
- What is your opinion on the additional assistant referees?
- High; it increases the quality of refereeing. Divide areas of the field and the pairs of players, which increase the control. Having held this role also helped me to understand how to improve the two functions. The goal-line technology can help, but should not be considered an alternative.
- The Italian school of refereeing always makes a trend.
- We started almost from scratch 8 years ago; it was a change of generations. The results show that we are back at the highest levels.