Ivanov to replace Rosetti as Head of Russian referees 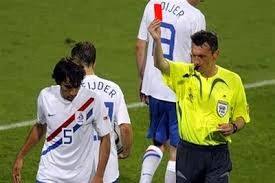 The 52-year-old, whose father Valentin was a former Soviet striker who was joint top scorer at the 1962 World Cup in Chile and the 1960 European Championship, retired after the 2006 World Cup in Germany. Ivanov (photo), who officiated matches at Euro 2004 in Portugal and the 2003 Confederations Cup in France, made headlines in 2006 after showing 16 cards, including four reds during a World Cup match between Portugal and Netherlands. "I understand how difficult and demanding job I have to do", Ivanov said. "But I feel the strength to succeed in this position".
Rosetti, who was named best referee in Serie A four times and officiated the Euro 2008 final between Spain and Germany, was hired by the RFU in 2011 in a bid to improve refereeing standards in Russia but resigned this month for family reasons.