Australian official Ben Williams has been named AFC Referee of the Year following another season of assured performances while officiating in the Confederation’s topflight tournaments. Williams, who is one of Australia’s most respected referees having taken charge of well over a century of A-League matches, saw off the challenge of last year’s AFC Referee of the Year Yuichi Nishimura from Japan and Bahrain’s Nawaf Shukralla to claim the individual accolade. During the year, the 36-year-old AFC Elite Referee officiated the decisive second leg of the 2014 FIFA World Cup qualifying playoff between Uzbekistan and Jordan as well as the first leg of the keenly-contested AFC Champions League semi-final between FC Seoul and Esteghlal, which was the fifth match in Asia’s premier club competition that Williams refereed. Williams, a physical education teacher by profession, also handled two qualifying matches for the 2015 AFC Asian Cup, which will be held in his native Australia, and has been placed on FIFA’s Prospective Referee List for next year’s World Cup finals in Brazil. “This is a fantastic recognition to be amongst the elites of Asian referees by becoming the best referee of Asia,” Williams said after receiving the 2013 AFC Referee of the Year award from Dato’ Worawi Makudi, FIFA Executive Committee Member and Chairman of the AFC Referees Committee. “I am very, very humbled and honoured with this award and it will further spur me to continue working for the beautiful game of football. There are several top referees in Asia and it’s really nice that you are recognised as the best. I am sure this is a great achievement not only for me but for the whole of Australian soccer. I advise youngsters to keep being humble and continue learning if they see great future and excitement in this profession”. (Source: AFC) 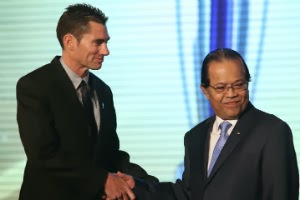