Swedish referee Jonas Eriksson had to read in a newspaper article that he was not selected for the World Cup this summer. Then, 37 days passed before he heard anything from FIFA. But that does not mean that Eriksson received some sensible explanation. “The team that was selected is not Europe's Top 10 team, I can say that”. 44-year-old Jonas Eriksson has been refereeing for a long time. He has refereed a World Cup and two Euros, as well as a host of Champions League matches. Last week, he also started his 18th Swedish premiere league, with the match between Hammarby and Sirius. When NSD talked with him, he has taken a few days off with the family, but he is also pleased that a new domestic Swedish season is running. “Yes, that's funny. During my 18 years, Allsvenskan has become hotter and hotter. It is much more interesting now, the audience is bigger. This also feels like a very open season. Everyone says Malmö, but you also have AIK, Gothenburg, Häcken, Norrköping and Östersund. There are many good teams this year, it will be exciting”, he says. 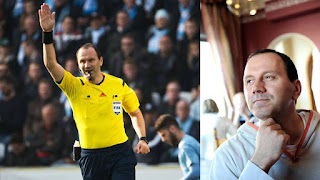 - It is your 18th Swedish season, do you know that the end of your career is approaching?
- Yes, of course I do. But I've said I'll stay on as long as I think it's fun and as long as the body feels okay. Right now, it just feels good. I feel comfortable.
- But there are other things that come with Jonas Eriksson's job. For example, he cannot tell in the newspaper where he is vacationing with his family. This is because of the threat against the country's football referees.
- I'm always very careful. I do not want people to know where I am and when I'm somewhere. The fewer that know the better.
- Do you feel that the threat against the referees has gotten worse?
- It has always been there in one way or another. I do not know if it's worse today, but I'm never on social media. I do not have Facebook, Twitter, Messenger or Instagram. It's not easy to get hold of me. I am cautious all the time. I am very careful who I give my phone number to and where I print my email address.
- Have you been up for any unpleasantness?
- No, not really. But I stay away from reading what people are writing. Googling yourself is not to be considered. But in fact, as a member of a team sport, such as football, you are at a much greater risk of being threatened than if you work at the police or at the Swedish Tax Agency. Then it's just one of eight threats reported to the police. It's a huge dark valley.
- Have you notified a police officer?
- No.
- Have you been close?
- Oh, no.
- Have you always been cautious throughout your career?
- Of course, it has become worse, over time. Secondly, it is a social development that has taken place in a certain direction, since I have gotten higher and higher up in my career. It brings harder and harder matches, bigger and bigger focus.
- What social development do you mean?
- The attitude people have against each other on social media for example. People have a language that is much more unpleasant now, for example on Twitter. It did not happen before, when you had to go to the person or send a handwritten letter. It took a while and cost a postage. In the new social climate, it feels like everyone is looking for people who do something wrong. 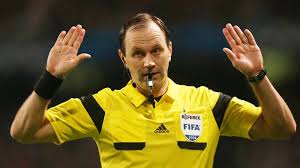 “The team that was selected is not Europe's Top 10 team"
Jonas Eriksson began to referee football in 1988. Over the past decade he has evolved into an international referee. Together with his assistants Mathias Klasenius and Daniel Wärnmark, he went to three straight international competitions: Euro 2012 in Poland/Ukraine, World Cup 2014 in Brazil and Euro 2016 in France. But there will be no World Cup in Russia for him this summer. Jonas Eriksson's team has gotten nothing. "It was very surprising", says Eriksson, who was told about the decision taken last fall via a newspaper article. “Then, 37 days passed before I received any communication from FIFA. On Christmas Eve, I received a text message where there was no explanation. Then I had a meeting with the protagonist at the end of January, beginning of February, where I was told that we were not selected, but I did not really get any explanation”. Jonas Eriksson is highly critical of FIFA's selection of World Cup referees: “The team that was selected is not Europe's Top 10 team, I can say that.”
- What do you mean?
- It's about traditions and that some countries are important to be represented. Sweden does not belong to those countries. I have also been told that it is an age question.
- An age question?
- Yes. That means that if they were to select referees from the top ten European championships, everyone would be too old to referee at the World Cup in Qatar in four years. Obviously, they had to think about the future, but they have never did that before.
- The younger referees will see and learn?
- Yes, you can say that. Of course, it's hard to hear it when you think you should be in the right place instead. 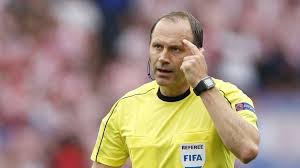 FIFA referees must not be older than 45 years. Jonas Eriksson has recently turned 44, meaning this would have been his last World Cup. He was very disappointed when he finally got the message.
- Obviously, I was disappointed, angry, sad, frustrated, irritated. There was a palette of feelings. At the same time, I have played football and have not been taken to the team; it is just to accept. But you think the coach should tell you what was wrong and bad. He continues: "We have refereed a World Cup and two European Championships, including a semi-final in 2016. Then I was ranked fourth amongst the world's best referees, but a year later I do not belong to Top 36. That's something that makes me wonder what has happened. I think that FIFA should communicate better and tell why you are not selected.
- Did you receive a message via a newspaper article?
- Yes, it was my colleague who read it first. We did not hear it from FIFA. It was very annoying. That respect should be possible after so many years in the referee career.
- Are you going to follow the World Cup?
- We shall see. Obviously, I'm interested. I'll hang out and watch some matches. But not at all with the same intensity as before.