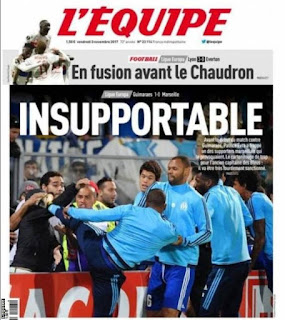 Footage shows the 36-year-old former Manchester United defender aiming an acrobatic kick at a supporter at the side of the pitch during the warm-up. Evra, who was named as a substitute, was dismissed before kick-off and Marseille started with 11 players. Governing body UEFA has charged Evra with violent conduct. The full-back has been suspended for "at least one game", with UEFA's disciplinary body to decide the case on 10 November. Marseille have also been charged with a field invasion by fans, setting off of fireworks and "acts of damages". French newspaper L'Equipe reported Marseille supporters had been jeering Evra for about half an hour while the players prepared for the game, which the French side lost 1-0. The player had gone over to the fans to talk to them, but the situation escalated. French football journalist Julien Laurens said Evra - who regularly posts light-hearted videos on social media - was insulted and also told: "Keep doing your videos, but stop playing football." Marseille said that they had begun an investigation into the incident. "No matter what happens, a professional player must maintain self-control despite provocations and insults, no matter how unjustified they may be", the club said in a statement. Marseille coach Rudi Garcia said after the match: "Pat has experience, and he must not react, it's obvious. Patrice is a more than just an experienced player. You can't respond, of course, to insults as bad as they are and as incredible as they might be because they come from one of our supporters. He must learn to keep his cool. That's all I can say." Garcia also criticised the fan, saying: "He's not a supporter of Marseille, because you can't insult your own players, you have to be behind all of us." Evra, who won five Premier League titles and the Champions League during eight years at Manchester United, joined Marseille from Juventus in January but has made only two appearances this season.
How it happened
- Named as a substitute, Evra begins warming up with his team-mates before the game
- The former Manchester United left-back appears to be the target of songs and abuse from the crowd for about 30 minutes
- Evra approaches the Marseille fans, about 500 of whom had travelled to Guimaraes
- He volleys a ball towards the crowd, but some of his team-mates come over and look to calm the defender down
- Evra climbs over the billboards and looks to confront spectators who have come towards the front of the stand
- The 36-year-old returns to the pitch, but a group of fans approach the billboards and Evra appears to kick one of them
- Evra is led away to the substitutes' bench, but is sent off by the referee and watches the game from the stands
Analysis
Julien Laurens, French football expert: “It is really sad. Patrice Evra is 36, he has got two children. He has played five Champions League finals, a Euro final, won lots of titles and this is probably the last few weeks of his career - it is really sad this is how he is going to end. You shouldn't abuse your own player - the abuse from the fans was targeted only at Patrice Evra - but Evra should never have responded the way he did. It has been really tough for him since the beginning of the season. He lost his place in the team, he has been really poor every time he played, and I think he just couldn't take the jeers, the abuse. There were a lot of insults, but the fans were also saying stuff like: "You're rubbish, go home. Keep doing your videos, but stop playing football." You can be critical, but the way they insulted him and his family - that doesn't justify his reaction, but you can see why he got frustrated. He is 100%. He says things like they are, he reacts the way they are. He says there are no fibs with him, so you get it as he says it or as he does it. Sometimes he should think a bit more.” 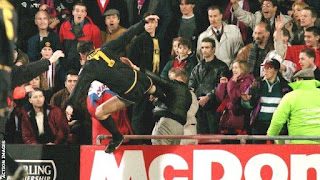 This incident evoked memories of Eric Cantona's infamous "kung-fu kick" during Manchester United's game against Crystal Palace at Selhurst Park in January 1995. The Frenchman was banned for nine months by the Football Association for the incident, which took place as he left the pitch after being sent off.