Asian refereeing icon Ravshan Irmatov from Uzbekistan was named Best Referee of the Year at the recent Globe Soccer Awards in Dubai, the UAE. An international referee since 2003, the 38-year-old old Irmatov is a five-time AFC Referee of the Year and took charge of four matches including a semi-final at the 2015 AFC Asian Cup in Australia apart from refereeing the deciding leg of the 2015 AFC Champions League final between eventual champions Guangzhou Evergrande from China and the UAE’s Al Ahli. The year 2014 also proved to be another excellent one for the Tashkent-born referee, who during the summer set a FIFA World Cup record after officiating the quarter-final match between the Netherlands and Costa Rica in the 2014 FIFA World Cup in Brazil. That game saw the experienced Uzbek become the first referee to officiate at nine World Cup matches, beating the previous record of eight he shared with Joël Quiniou of France, Benito Archundia of Mexico and Uruguay's Jorge Larrionda. 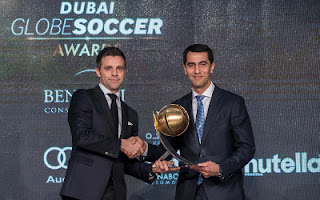