The Confederation of North, Central America and Caribbean Association Football (CONCACAF) announced the 2015 CONCACAF Male and Female Referees of the Year, as winners in the annual CONCACAF Awards. In an equally-weighted vote among Member Association women’s and men’s national team coaches/captains, media and fans, both referees won for the first time in the three-year history of the honours: 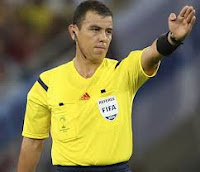 
The CONCACAF Awards are designed to honour the year’s outstanding performers and achievements in confederation-sanctioned competitions involving national teams at all levels and age categories, including FIFA World Cup matches and qualifying for both genders. Performances also eligible for recognition included those achieved in professional club football leagues within the CONCACAF Member Associations, as well as the CONCACAF Champions League. The votes of three important stake-holding segments within the Confederation were counted in compiling the results. Member Associations’ national team coaches and captains (women’s and men’s), accredited media and fans each accounted for one third of the final vote. A semi-final list of maximum 10 nominees in each category was determined by a vote of Technical Directors from each of CONCACAF’s 41 Member Associations and the CONCACAF Technical Study Group, which analyzes tactics and rates performances at all official CONCACAF tournaments.