In spite of many rumours about an imminent removal of the age limits for international referees, the rules are unchanged: FIFA will not be accepting referees older than 45 in 2015. The only news is that the deadline for nominations was changed from 20 September to 26 October, with the approval scheduled for the FIFA Referees Committee meeting on 26-27 November 2014. 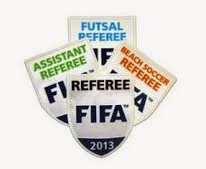 Following the recent meeting of its Executive Committee, FIFA sent out circular no. 1444 regarding the 2015 FIFA Refereeing International Lists: “We look forward to receiving your nominations for international referees, assistant referees, futsal referees and beach soccer referees via the link provided to you in the body of the email accompanying this circular. The deadline to nominate international referees for the upcoming year is 26 October 2014. We have attached the regulations governing the registration of international referees, assistant referees, futsal referees and beach soccer referees on FIFA's lists for your convenience.
We would also like to bring the following points to your attention:
1. The proposed referees shall be at least 25 years old (23 years old in the case of assistant referees) and shall not have reached the age of 45 on 1 January of the year for which they have been nominated; candidates may not be older than 38 in the year in which they are nominated unless they have previously appeared on the list for which they are being proposed.
2. Newly nominated referees must be born no later than 1989 and assistant referees must be born no later than 1991 (two years younger) in order to ensure a minimum level of experience.
3. Each candidate must be ranked based on the marks obtained for officiating games at the national level during the 12 months prior to being nominated to the list of international referees. Please do not put the nominees in alphabetical order.
4. At a minimum, all nominated referees must pass a FIFA-approved fitness test and a medical examination on or after 26 May 2014.
The FIFA Referees Committee will carefully consider all nominations submitted by each member association before deciding who will be named on the upcoming international lists.”
Posted on Wednesday, October 01, 2014