In Group D, Italy and Uruguay both still have strong hopes of qualifying for the Round of 16 and Marco Rodriguez (photo) will referee this important match. For Rodriguez, 40, it will be the second match of the tournament after Belgium-Algeria. The Mexican is taking part in his third World Cup, having taken charge of two matches at South Africa 2010 and two more at Germany 2006. During his career, Rodriguez has officiated at three FIFA U-17 World Cups (2003, 2005 and 2013), one FIFA U-20 World Cup (2009) and five editions of the CONCACAF Gold Cup. His most prestigious assignment was the final of the FIFA Club World Cup 2007 between Boca Juniors and AC Milan.
Following his first match at this World Cup, Australia-Netherlands, Djamel Haimoudi will officiate Costa Rica-England. Haimoudi is 43 years old and from Algeria. In his career, he has covered the FIFA Confederations Cup 2013, the FIFA Club World Cup 2012 and the FIFA U-20 World Cup 2011. For his home confederation – CAF – he has officiated at three editions of the Africa Cup of Nations, in 2008, 2012 and 2013. At the end of the most recent edition, he refereed the final between Nigeria and Burkina Faso.
Pedro Proenca from Portugal will take charge of Japan-Colombia. Following Cameroon-Croatia, it will be the 43-year-old’s second game in this competition. He has previously overseen two opening-round matches at last year’s FIFA Confederations Cup and the Brazil 2014 play-off between Greece and Romania. Proenca refereed at the UEFA Euro and the UEFA Champions League final in 2012.
One day before his 38th birthday, Carlos Vera from Ecuador will oversee Greece-Côte d’Ivoire. Earlier in this tournament, he refereed Iran-Nigeria. Vera has been an international referee since 2007 and officiated at the Copa America 2011 as well two FIFA competitions: the FIFA Club World Cup 2012 and last year’s FIFA U-20 World Cup. 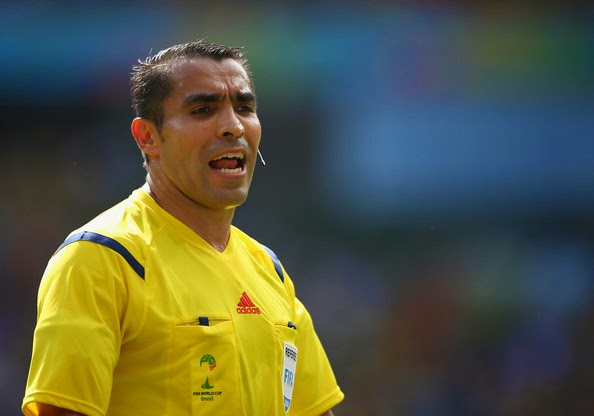