Switzerland-Ecuador will be officiated by Ravshan Irmatov from Uzbekistan. The 36-year-old is taking part in his second FIFA World Cup, having overseen five matches at the 2010 edition, including the opener between South Africa and Mexico, Argentina-Germany in the quarter-finals, and the semi-final encounter between Uruguay and the Netherlands. Irmatov (photo) has refereed at ten FIFA competitions overall. Most recently, he took charge of Brazil-Italy at the FIFA Confederations Cup Brazil 2013.
Referee for the second Group E game between France and Honduras will be Sandro Ricci from Brazil. He was the ‘Referee of the Year’ in his home country in 2010 and joined FIFA’s international list in 2011. In 2013, he oversaw four FIFA U-20 World Cup fixtures as well as a quarter-final and the final of the FIFA Club World Cup in Morocco.
Argentina against Bosnia-Herzegovina, the first match taking place at the Maracana, will be refereed by Joel Aguilar from El Salvador. In doing so he will become the first referee from his country to officiate at the finals of a World Cup. Aguilar, 38, covered the CONCACAF Gold Cup final in 2011 and 2013 as well as the CONCACAF Champions League in 2011. 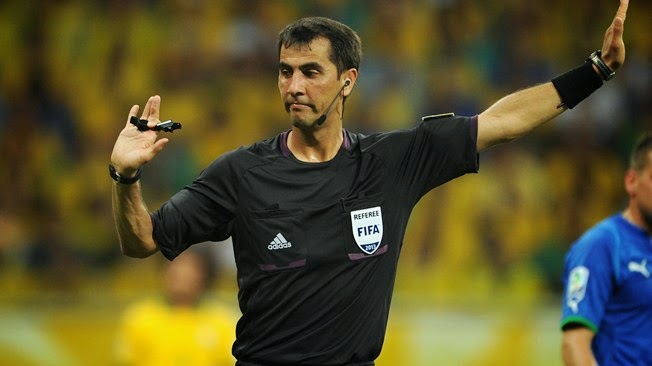