Belgium's 5-1 victory over Luxembourg on 26 May 2014 will not stand as an official FIFA-recognised international friendly match after coach Marc Wilmots used seven substitutes during the match. The referee was Tom Harald Hagen (NOR, photo). 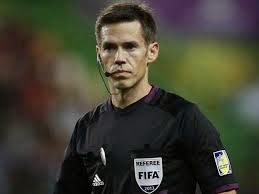 The Belgium coach made five substitutions at half-time in Genk to give his players some game-time ahead of the World Cup, and the sixth change saw Divock Origi replace Lukaku just after the hour. Teams are only permitted to use six substitutions in friendly matches under FIFA regulations, which were broken when Nicolas Lombaerts was introduced in the 77th minute. "This match has subsequently been declared unofficial due to Belgium exceeding the maximum number of substitutions permitted", FIFA confirmed on Wednesday. The result will not count towards the FIFA rankings, which are set to be updated on Friday ahead of the finals in Brazil. Belgium are currently 12th. As a result, Romelu Lukaku's hat-trick and Adnan Januzaj's debut will be wiped from the records.