Europe's leading men and women referees will be in Lisbon next week for the annual UEFA winter courses. The match officials will be preparing for the knockout phase of UEFA's club competitions, with international newcomers to the FIFA list to get a comprehensive briefing on their duties as a European referee. A group of top European referees are now also in full preparation for this summer's FIFA World Cup in Brazil. European football's governing body organises two main referee events a year: a summer gathering, in which match officials are briefed for the new season and given specific instructions for club and national team duties, and a winter get-together designed to guide the referees into the second half of the campaign. 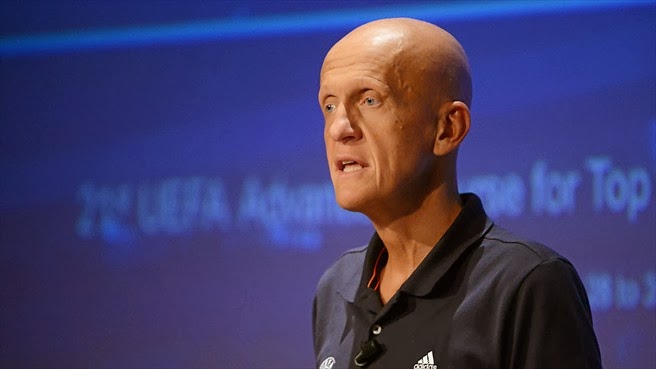 The 22nd UEFA Advanced Course for Top Referees and the 23rd UEFA Introductory Course for International Referees will see men and women referees sharing technical and practical sessions. Female referees joined the UEFA winter session for the first time last year – demonstrating the importance that UEFA attaches to women refereeing as the women's game continues to flourish.
"There will be 28 different national associations represented from the new entries to the 2014 FIFA list for European international referees, in a total of 44 new names attending the introductory course," says UEFA chief refereeing officer Pierluigi Collina in his welcome message to the course. "It will be a first experience at international level for most of them, although 20 have attended the CORE [Centre of Refereeing Excellence] courses in Nyon, confirming its importance for refereeing development. This will be the starting point of their preparation for officiating at UEFA matches, and their first appointments as international referees will include youth mini-tournaments or the qualification rounds of the UEFA club competitions." The new internationals will go through an extensive medical check-up and will also take the FIFA fitness test. Additionally they will receive various instructions from the UEFA administration. The referees' knowledge of the English language – the common refereeing language – will be evaluated through interviews with members of the UEFA Referees Committee, which comprises experienced former international referees. At technical sessions, the participants will attend presentations given by Referee Committee members, and video sessions will analyse specially prepared footage from UEFA competition matches over the past and present season, including UEFA Women's EURO in Sweden last summer.
Sixty-five leading men referees and 16 women have been invited to the advanced course. A selection of these top officials will undergo an injury prevention screening and then the whole group will undertake a fitness check. "The Champions League and Europa League knockout stages are to be played soon and need to be prepared thoroughly, so they will also receive instructions from UEFA Referees Committee members via the analysis of previous situations in matches", says Collina. "As usual all the referees will undergo a very tight program, very fruitful for their preparation". (Source: UEFA)
Advanced Course