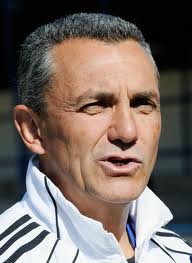 Former head of FIFA's Referee Department, Jose-Maria Garcia Aranda Encinar, has been appointed as an advisor to Russian football chief Sergey Fursenko, the country's football association said on Thursday.
"Garcia Aranda's job would be to consult (Fursenko) on various issues, including better communications with FIFA and UEFA," the RFU said on their web site. "His contract will run through 2014." The 55-year-old Spaniard has also been given a tough task of improving the standards of Russian referees, who have often been the target of criticism for poor officiating.
Garcia Aranda had been one of FIFA's top referees, officiating at the 1998 World Cup in France and Euro 2000 in Belgium/Netherlands, before retiring in 2001. He then headed FIFA's Referee Department from 2003 to 2010.
Russian officials have been trying to improve the image of the country's most popular sport following FIFA's decision to award Russia the right to host the 2018 World Cup.